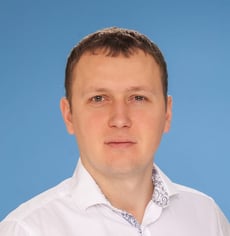 Maxim Tutuianu, Channel Development Manager at Bitdefender shares his thoughts on which challenges face IT companies in endpoint security in Russia and how to overcome them and reach your goals.

Maxim believes that like in any other country there are more international competitors in Russia rather than local ones. Each vendor can demonstrate its advantages that might be appealing for this or other segment.

"Russia is a huge market with a lot of business opportunities out there. Even a few percent from the market share could mean a big revenue for a lot of companies"

Now Russian companies can see an opportunity to try a new product instead of traditional solutions they used before. Read the full version of the interview in our blog below:
- How long have you been working on the Russian market?
We’ve had a presence on Russian market for several years by now, but we really started focusing on developing our business exactly in Russia and CIS region in 2015. We already have distributors and quite a good sales channel so we’re expecting to grow our market share and brand awareness quite fast.

- Which vertical markets have become most crucial for you in Russia? What can you offer to them?

We target those verticals, which have certain characteristics of the network structure, like multiple location for instance,such as hotels, gas stations, retail chains, banks; or hybrid infrastructure of physical and virtual machines, where we can easily show benefits of our technology over any competitor.

- How would you describe your goals on Russian market?

Our aim is to maintain a loyal sales channel, which will be increasing the market share with us. We will be working hard on the brand awareness – specifically in the segments and channels that are mostly targeted at.

- Which challenges do you think IT companies in endpoint security can face when doing business in Russia? Which of them have you faced?

Most of the companies need to obtain local certificates in order to offer their solutions to the government and public institutions. Also it is a must to provide a product in local language. Russian people have technical training at universities in Russian language and it’s not easy for them to get used to technical terms in English.

- Which regions are most attractive for Bitdefender in Russia?

Russia has a highly centralized economy with Moscow as the most important city. Saint Petersburg can also be very competitive in some sectors. That is the reason why the western part of the country is a priority for us. We already have several partners in this region. But we are also interested in new collaboration opportunities on the eastern part of the country.

- What is the main target audience for Bitdefender in Russia? What kind of business is your main customer? Large businesses, small-sized, or medium-sized?

Our ambition is to expand our presence first in small and medium-sized companies and then continue to the large businesses as well. When Bitdefender will be able to demonstrate a strong position and positive references from SMB, the next step will be seize the market of big and large business.

- Does the policy of import substitution put any impact on your business in Russia?

Today Russian companies seem to be more reluctant to buy foreign products, especially in public sector when they have preferences in terms of choosing a local vendor. But taking into consideration the unique features, technologies and functionality incorporated in our products, it’s very hard to find the exact substitution. Thus Russian companies can see an opportunity to try a new revolutionary product instead of a traditional antivirus solution they used before.

- Do you use other vendors’ solutions in your products, maybe even Russian?

- Do you plan to open your office in Russia?

Such market as Russian requires having a local presence in order to keep growing, so we do have such plans. However as I’ve already mentioned before, we are more interested in building a strong and loyal distribution network. It can be a great way to emphasize our difference  from other companies and build a competitive advantageous position, especially in those industries where the product or service itself may be at risk of being undifferentiated.

- In your opinion, what is a market segment to have a gap that could be successfully filled by foreign companies?

Any segment can be a good option for international companies. Like in any other country there are more international competitors in Russia rather than local ones. Each vendor can demonstrate its advantages that might be appealing for this or other segment. So it’s not a question of the gap in one specific segment, but the regulations. For instance, companies with a leading role on the global market in the enterprise segment of virtual environments almost don’t exist in Russia, having a combined market share of less than few percent. We understand this special characteristic of the market and we are willing to adapt and offer our technology to Russian customers.

- What advice would you give to other foreign companies, which are now contemplating to enter the Russian market?

Russia is a huge market with a lot of business opportunities out there. Even a few percent from the market share could mean a big revenue for a lot of companies. If your company has some really competitive advantages and you are willing to enter Russian market, don’t hesitate to do it. It will not be easy but if you succeed you can have a lot of benefits.

What are the key trends that will impact the industry and profiles of leading suppliers of Information Security Market in Russia? Submit Your Proposal to speak at InfoSecurity Russia 2016.

On 20-22 September, join thousands of your peers at InfoSecurity Russia 2016. Meet the industry leaders and share your ideas and experience on how to succeed in today's world of information security.